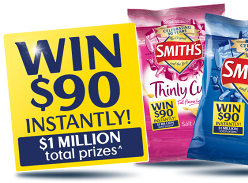 Entry Restrictions: Entry to the Promotion is open to Australian residents currently living in Australia, aged 18 years and over who fulfil the entry requirements.

Directors, management, employees, officers and contractors (and their immediate family members) of agencies/companies directly associated with the conduct of this Promotion, the Promoter, businesses involved in determination of winner/s for the Promotion, businesses involved in the management of the Promotion, any organisation benefiting from the Promotion, the Promoter’s distributors, suppliers, subsidiary companies/businesses and associated companies and agencies are not eligible to enter. "Immediate family member" means any of the following: spouse, ex-spouse, de-facto spouse, child or step-child (whether natural or by adoption), parent, step-parent, grandparent, step-grandparent, uncle, aunt, niece, nephew, brother, sister, step-brother, step-sister or 1st cousin

“Immediate families” includes a spouse, ex-spouse, de-facto spouse, parent, step-parent, child or step-child (whether natural or adopted), sibling or step-sibling (whether natural or adopted), grandparent, aunt, uncle, niece, nephew or cousin, whether or not they live in the same household as the director, manager, employee, officer or contractor.

Entry Mechanic: To enter the Promotion, an entrant must complete the following steps during the Promotion Period:

Purchase any Smith’s Chips Eligible Product from any store in Australia that stocks and sells the Smith’s Chips Eligible Product;
Retain the original purchase receipt as Proof of Purchase;
Visit the Website and follow the prompts to the promotion entry page. On the promotion entry page, the entrant must complete the promotion entry form by:
inputting the requested details including:
Full name,
Date of birth,
Email address,
Mobile phone number;
uploading a photo or scanned copy of their receipt for the Smith’s Chips Eligible Product purchased in accordance with the above requirements
Entry forms must be fully completed in order for a submitted form to be accepted by the Promoter;
Entrants will then be directed to play via Website the promotional ‘Unwrap the Present’ game (“Virtual Game”). During the Virtual Game, the entrant must follow the prompts on screen to unwrap the virtual Smith’s present to reveal whether or not they have won an Instant Prize. An on-screen message during the Virtual Game will advise the entrant whether or not they have won an Instant Prize. All Instant Win Prize claims are subject to verification;
Entrants who are notified that they have won an Instant Prize will win the prize indicated in this Schedule. Entrants who have not won a prize will receive the message “Sorry you haven’t won an Instant Win Prize this time but you’re in the draw for a chance to play Unwrap to Win up to $250,000”.
All valid entries received (winning and non-winning Instant Win Prize entries) will be automatically placed in the Draw.

Entries are deemed to be received at the time and on the date that they are received by the Promoter. Each entrant must create their own entry and only submit an entry in their own name.

Smith’s Chips Eligible Product: Includes any pack size or flavour variant of the following Smith’s products, but excludes Multipacks/Sharepacks or products purchased as part of a Multipack/Sharepack:

Smith’s Thinly Cut;
Smith’s Crinkle Cut;
Smith’s Poppables; and
Smith’s Oven Baked.
Proof of Purchase: Entrants must retain their purchase receipt(s) for all entries as proof of purchase and may be required to validate and claim their prize. Failure to produce the proof of purchase for all entries when requested may, in the absolute discretion of the Promoter, result in invalidation of ALL of an entrant’s entries and forfeiture of any right to a prize. Purchase receipt(s) must clearly specify the store of purchase and that the purchase was made during the Promotion Period but prior to the entrant submitting an entry into the Promotion.

Maximum Number of Entries: Multiple entries permitted, subject to the following: (a) only one (1) entry permitted per Smith’s Chips Eligible Product purchased; (b) each entry must be submitted separately and in accordance with entry requirements in this Schedule and Terms of Entry; and (c) a maximum of three (3) entries per person per day is permitted.

Where an entrant has submitted multiple entries into the Promotion, a maximum of three (3) Instant Win Prizes may be won by any individual entrant during the Promotion Period (except for SA residents).

Draw: The Draw will take place at 12:00pm (Sydney time) on 01/06/21, at Greeneagle Distribution & Fulfilment of Unit 5, 9 Fitzpatrick Street, Revesby NSW 2212, in the presence of an independent scrutineer. The Promoter may draw additional reserve entries and record them in order in case an invalid entry or ineligible entrant is drawn.

The first valid entry drawn from all eligible entries received during the Promotion Period in the Draw (“Draw Winner”) will win the opportunity to participate in the Major Prize Unwrap the Present Event (“Event”) for the chance to win up to AUD$250,000. Details of the Event are specified below.

The Event will take place on a date in June 2021 at 12 noon (Sydney time) at an address to be determined within Australia, in accordance with the Unwrap the Present Mechanic, and will be scrutinised by an independent person.

At the Event, the Draw Winner/or their nominated proxy/representative (“Attendee”) will be shown twenty (20) numbered and wrapped presents/envelopes.

Two (2) of the presents/envelopes will contain a message indicating a ‘Major Prize Symbol’.

Eighteen (18) of the presents/envelopes will contain a message indicating a ‘Consolation Prize Symbol’.

If the Attendee selects two (2) presents/envelopes both containing the promotional message representing the Major Prize Symbol then, subject to verification by the judges, the Draw Winner will win AUD$250,000.

If the Attendee selects two (2) presents/envelopes both containing the promotional message representing the Consolation Prize Symbol, then the Major Prize will not be given away and, subject to verification by the judges, the drawn Participant will win the AUD$1,000 Consolation Prize.

Entrants will be notified immediately in writing on Website screen whether or not they have won an Instant Prize, subject to verification. Instant Prize winners will be required to provide additional details to the Promoter in order to claim their prize, via email as directed by the Promoter.

The Draw Winner will be notified via email and phone within two (2) days of the Draw. The Draw Winner’s name and State or Territory of residence will be published on the Website on 02/06/21.

Prize Delivery: All cash prizes will be paid by the Promoter to each winner via a direct EFT transfer into the winner’s nominated Australian bank account, subject to winner verification.